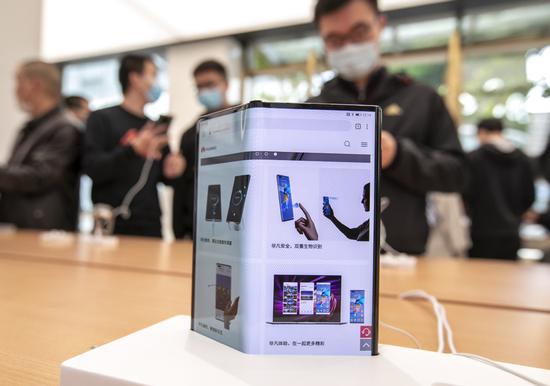 Consumers check out Huawei foldable smartphones at a store in Shanghai on Oct 24. (Provided to China Daily)

Foldable smartphones are set to become all the rage this year as more manufacturers are expected to launch them.

Devices with foldable screens can be used either as tablets or as pocket-size handsets, creating broad application scenarios.

This nifty model is the smartphone market's attempt to shake off an innovation lull and bolster sales that have been sluggish due to the COVID-19 pandemic.

Global foldable panel shipments are expected to surge 454 percent year-on-year to 3.1 million units in 2020. Data for last year have yet to be compiled and confirmed.

Total 2020 revenues are seen rising 394 percent to $462 million, according to a report from Display Supply Chain Consultants, an industry tracker.

The DSCC report said Samsung was clearly the dominant brand last year with an over 90 percent share in the third and fourth quarters and an 87 percent share for the full year on the basis of panel procurements.

It is estimated to take up an 88 percent share in last year's foldable smartphone market in terms of panel shipments.

At least three foldables are expected from Samsung this year. In addition, Samsung Display is expected to become more aggressive in helping other brands enter the foldable market by selling them panels for the first time this year.

In February, the South Korean technology giant unveiled Galaxy Z Flip, which uses a vertically folded screen and a retro flip design, and in September the Galaxy Z Fold 2.

The DSCC report noted by model, the Samsung Galaxy Z Flip and the Z Fold 2 are expected to be the two bestselling foldables last year on both unit and revenue basis.

Ross Young, CEO of DSCC, tweeted that Xiaomi Corp may launch three foldable smartphones this year, each with a different design－out-folding, in-folding and clamshell.